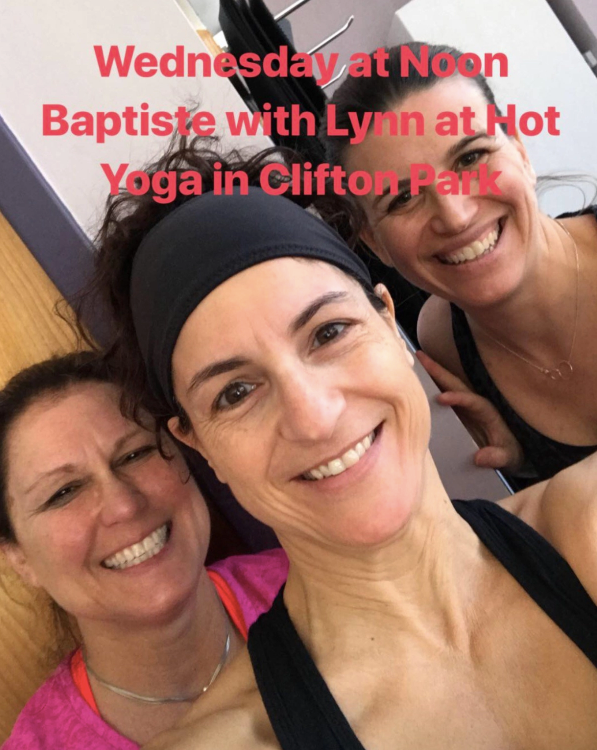 What if we grew up in a world where we were told it was alright to fail? Oh the possibilities and life lessons that would arise. We would be a society of adventurers and optimists never worrying about what others thought or being embarrassed.

I ventured to Lynn’s Baptiste class at noon today. Sorry I cut off your face, Lynn, but I want to get the message out that this is a class to attend. After working all morning, I wanted movement, and Lynn’s class was just what I needed.

The messages that flow from yoga can be life-changing if we let them in. Today in tree pose, Lynn basically gave us permission to fail. She wanted us to flow, rise, and bend enough in this pose so that we fell over. This threw me off a bit, and at first I had a hard time getting into the pose. But then I reached down to form my foundation and lifted up stretching my tree toward the ceiling. It felt good, so I reached back further and then a little more, surprised by how far back I was able to go. I kept reaching. Then I fell over.

I went back into it, but just couldn’t get my balance. It didn’t feel like failure, because Lynn was there. She said it was alright to fall over. It happens to everyone, but what happens internally is what gets us. We become self-conscious, angry with ourselves, and often don’t try again. Who wants to embarrass themselves in front of everyone else by falling?

But as Lynn said, what would happen if you laughed and went back into it? What would happen if instead of putting yourself down, you showed compassion for you? If my friend fell over, I wouldn’t call her a yogi fail, I would encourage her to try again. So why is it so hard for us to do that for ourselves?

I’m glad I ‘failed’ today, because I went deeper into the pose than I ever do. That was the purpose. Through that failure, I found success. I found compassion for me.

I learned today that laughter is the best way to get me back into a pose. Don’t take myself so seriously and go with the flow. After all, we are like the oak tree. We may bend, but we won’t break.

Self reflection and journaling: