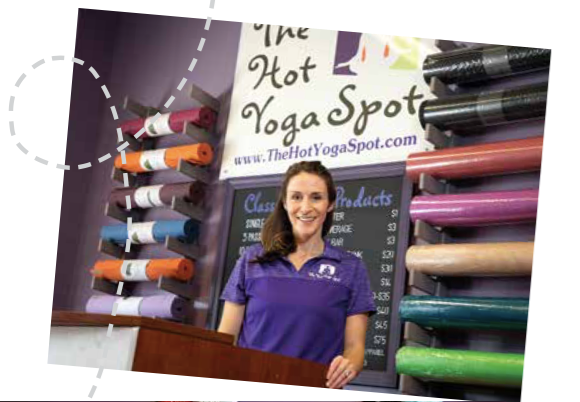 The Hot Yoga Spot Founder, Jessica Fuller, was featured in UAlbany Alumni Magazine as a former student who has done great things in the community.

"Jessica (Lustig) Fuller probably never foresaw that her decision to enroll at UAlbany would impact just about every facet of her life, from where she lives to the purple-painted walls of her business, The Hot Yoga Spot. But it has.

A practitioner of yoga since her teens, Fuller began working out in local studios and, at age 23, hit upon the idea of starting her own, close to UAlbany. She established The Hot Yoga Spot in late 2010 at the intersection of Western Avenue and Fuller Road, teaching all of the classes herself. Pleased at the studio’s early success, she relocated it a few months later to a 2,700-square-foot site at Stuyvesant Plaza, nearly quadrupling the space available to accommodate an eager influx of new clients.

Within a few years, Fuller established four additional studios in East Greenbush, Latham, Clifton Park, and Saratoga. More than 40 instructors welcome hundreds of students daily; “we have members who come all the time or once a week,” says Fuller."

Read the full article below: